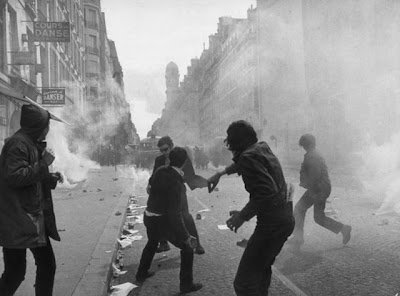 APPLY FOR THIS OPPORTUNITY! Or, know someone who would be a perfect fit? Let them know! Share / Like / Tag a friend in a post or comment! To complete application process efficiently and successfully, you must read the Application Instructions carefully before/during application process.
Following an initial confrontation between Parisian students and police on Friday 3rd May 1968, on the following Monday (6th) twenty to thirty thousand students and other young people (depending on which figures you trust) marched on the Sorbonne, which the police had made out of bounds for students. The demonstrators demanded the release of their fellow students, the re-opening of the Sorbonne and the withdrawal of the police from the Latin Quarter. As the crowd approached and scuffles broke out, the police around the university forced the students back with tear-gas.

The students staged another demonstration on Friday 10th May. Even though the authorities removed of the police from the Sorbonne and environs, the students still wanted the release of all their fellows still held in custody. They gathered at the square in Denfert-Rochereau, on the Left Bank, where Daniel Cohn-Bendit and the other spokespeople for the students asked them where they wanted to go. They decided to march on the building of ORTF, the state broadcasting network, in response to the biased and insulting reports about the student demonstrations. 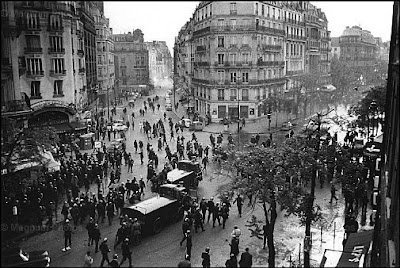 The police surrounded the march on the Boulevard Saint Michel, halting the demonstrators’ progress. The students decided to occupy and defend the Latin Quarter, they spread into neighbouring streets and quickly started constructing barricades out of anything they could find. Many sympathisers – young and old – flocked to the Latin Quarter to join in the student revolt after listening to their exploits on independent radio stations. A passing builder demonstrated the use of a pneumatic-drill to students who were trying to dig up the cobblestones (the soon-to-be infamous pavées) from the street to add to their arsenal. 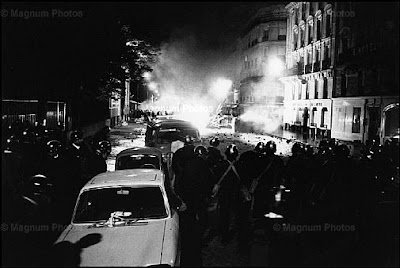 Many local residents provided support for students as the police attempted to storm the barricades, giving sanctuary to those escaping the police and medical aid to the injured. They too became caught up in the violence which raged until the morning of the next day, many fell under baton blows from the police, who also fired tear-gas grenades into the apartment buildings they suspected of containing students. 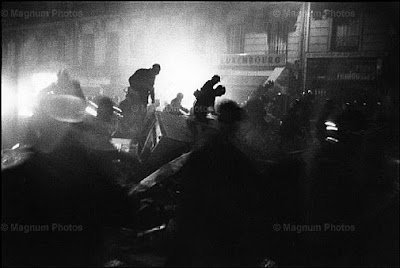 These actions and the perceived over-aggression of the police, turned public opinion against the authorities. As one radio commentator said at the time: ‘This cannot be true, the CRS [police] don’t do things like that!’ What started as a student demonstration against the paternal authoritarianism of the universities had grown into something larger. 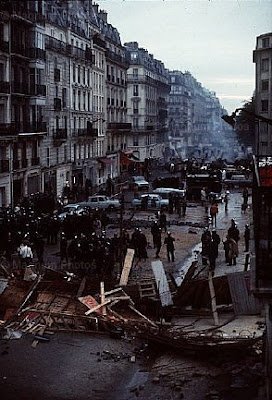 After the students had dispersed and the police had re-occupied the Latin Quarter the clean-up operation began. But the troubles were far from over, in a radio interview Daniel Cohn-Bendit calls for a national strike. The “strike and occupy” movement had begun.

The Marxists Internet Archive hosts a number of primary sources from May 1968, including translated excerpts from Le Monde reports about the ‘Night of the Barricades’.