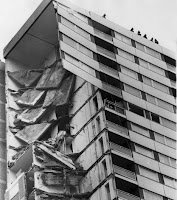 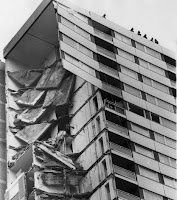 At around 5:45 in the morning of Thursday 16th May 1968, in flat 90 of the newly completed Ronan Point high-rise housing block in Newham, East London, a 56 year old woman called Ivy Hodge struck a match to light the gas stove for her early morning cup of tea. The flame ignited the gas that had collected in the room from a leaky connection to the cooker. The explosion blew out a load-bearing wall causing the complete collapse of one corner of the building as the four flats above Ivy’s came crashing down.

Ivy survived the collapse by being blown clear by the explosion; however, four people died and another seventeen received injuries. The death toll would certainly have been higher if all the flats in the newly opened building had been occupied. The building was repaired and strengthened to avoid a repeat of the tragedy, which prompted the Government to tighten up building regulations.

The disaster at Ronan Point, along with the increasing social problems endemic in many of the prefabricated high-rises built to provide cheap housing, tarnished the modernist dream of ‘villages in the sky’. This disillusionment resulted in an eventual move away from tower blocks, many of which were pulled down while they were still viable buildings. Newham Council demolished Ronan Point itself in 1986. More recently, the need for housing in London and other British cities has resulted in flats in ex-Council high-rise flats becoming popular with young professionals.