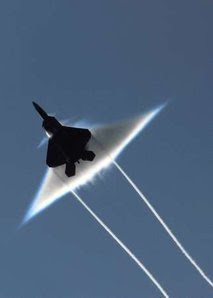 If we had a prize for the shot of the week, we’d give to it Navy photojournalist Ron Dejarnett. He took the photo you see above last week, during Exercise Northern Edge in the Gulf of Alaska. Dejarnett captured an Air Force F-22 passing through the sound barrier, as it flew over the USS Stennis.

It’s hardly the first time a fighter aircraft has been photographed at Mach 1. In fact, one of our favorite images shows a Navy F/A-18 breaking the sound barrier during a fly-by of the carrier Constellation in 1999. Ensign John Gay’s famous photo of a Hornet hitting Mach 1 near the USS Constellation. He captured the shot with a Nikon 90S, using a shutter speed of 1/1000th of a second. Gay’s iconic image took first place in a 2000 world photography contest.

For the physics-and-engineering crowd, LiveScience.com offers this explanation of the effect depicted in the photographs:

A layer of water droplets gets trapped between two high-pressure surfaces of air. In humid conditions, condensation can gather in the trough between two crests of the sound waves produced by the jet. This effect does not necessarily coincide with the breaking of the sound barrier, although it can.