The Last of the Dead 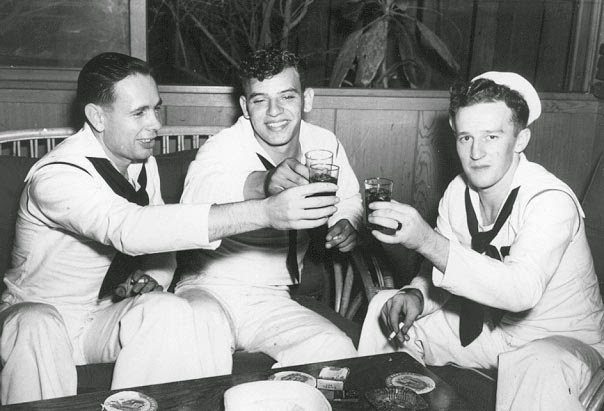 Final hours: Clifford Olds (r), a sailor on the USS West Virginia,celebrates with shipmates on the evening of 6 December 1941.  When the Japanese attacked Pearl Harbor less than 12 hours later, Olds was one of three sailors trapped in a water-tight compartment at the bottom of the ship.  They survived for 16 days before succumbing,  Don Martin photo at USSWestVirginia.org.

..Today’s reading assignment comes from Streiff at RedState.com, marking a day in American military history that many have forgotten.  It’s a powerful and searing narrative, a reminder of the ultimate sacrifice made by some who wear the nation’s uniform.

As he observes, some who give their lives in the defense of freedom don’t always perish immediately.  Some pass days or even weeks later, in a hospital bed, or in the aftermath of Pearl Harbor, trapped in the hull of a sunken battleship, hoping against hope for rescue:

On the morning of December 7, 1941, the USS West Virginia (BB-48) was moored on Battleship Row outboard of the USS Tennessee (BB-43). She was a Colorado-class battleship, launched in 1921, and represented state of the art in US naval architecture. She’d been designed to slug it out with other battleships holding her place in line of battle. Her vulnerability to air attack wasn’t a great concern. When the attack passed and the damage was assessed, the West Virginia was sunk. She rested in 36-feet of water with her superstructure exposed and accessible.

Much of her port side had been ripped open by as many as eight Japanese torpedoes and her rudder had been blown off by another.  The battleships’s multi-layered, anti-torpedo protection system had been completely broken through, making it impossible to raise the ship without the use of extensive external patches.  These structures, which covered virtually the entire hull side amidships, extended vertically from the turn of the bilge to well above the waterline.  The patches were assembled in sections, with divers working inside and out to attach them tothe ship and each other and were sealed at the bottom with 650 tons of concrete.

It was noisy in Pearl Harbor during the days and weeks following the Japanese attack.  Salvage control parties worked almost non-stop.  The noise of hammers cutting into the capsized USS Oklahoma; fireboats pouring water on the blazing Arizona, still aflame days after the attack.

Amid the din, crews working on the West Virginia head an occasion banging noise.  At first, they thought it was a hydraulic line or steel cable slapping against the hull.  But in the early morning hours, when activity slowed, they realized the banging sound was coming from deep inside the ship.  Members of the crew had survived and were trapped in the hull.

But there was no way to get them out. Streiff resumes the narrative, based on a 1995 Honolulu Advertiser article that was reprinted by the Seattle Times:

Three young sailors, Ronald Endicott, 18; Clifford Olds, 20; and Louis “Buddy” Costin, 21, were trapped in an airtight storage room below water. They had access to a supply of potable water and emergency rations but it proved a cruel gift.

To attempt to cut an access route to the submerged  storage room risked the acetylene torches causing a catastrophic explosion on the way in and, because the storage room was submerged, once the compartment was breached there was a good chance it would flood before the men could be extracted.

So, the bangs were ignored; there was no other option.  As the battleship settled into the mud of Pearl Harbor, the portion of the hull where Endicott, Olds and Costin sat trapped was resting against the hull of the USS Tennessee.

It was impossible to reach that portion of the hull and pinpoint exactly where the noise was coming from. Marines standing guard near the West Virginia covered their ears.  Men that later endured the hell of Guadalcanal, Tarawa and Iwo Jima would remain haunted by the banging inside the hull for the rest of their lives.

And the calendar; a foot high and fourteen inches wide.  The days were crossed off with a red “X” from December 7th until the 23rd, two weeks and two days after the West Virginia went down.

Officially, the Navy lists the date of the Pearl Harbor attack as the day the three men died.  But eventually, the truth leaked out and reached a few members of the dead sailors’ families.  Most were too horrified by what they learned to share it with their kin.

According to the original Seattle Times article, the calendar found inside that storeroom was sent to the Chief of Naval Operations in Washington and disappeared.  Two of the sailors were laid to rest at the National Memorial Cemetery of the Pacific (The Punchbowl), and the third was returned to his hometown for burial.