Review: "The Assassination Of Abraham Lincoln" on PBS 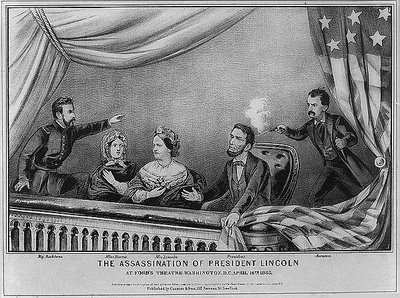 These past few weeks have been busy ones for those of us who are endlessly fascinated by all things related to Abraham Lincoln. We of course celebrated the bicentennial of his birth on February 12. Last week saw two major announcements concerning Lincoln artifacts. A possibly “new” photo of Lincoln was discovered in an album which once belonged to General Ulysses S. Grant. And the Smithsonian got around to opening Lincoln’s pocket watch, confirming a legend that a jeweler had engraved inside the watch a tiny message about Fort Sumter and the U.S. government.

During the bicentennial week last month, there were three major television specials about Honest Abe. Public Broadcasting System (PBS) ran two of those specials, one about the assassination and one which attempted to find the “real” Lincoln. This post is my review of the assassination documentary.

“The Assassination Of Abraham Lincoln” was shown as part of the American Experience series on PBS, one of the longest-running and best on public television (or on television, period). American Experience specials are always entertaining, informative, and for a lack of a better word, “classy.” This 90-minute documentary about one of the darkest periods in American history is no different from its predecessors in this respect.

There are some admirable things about this documentary. The best of the best writers, historians, and Lincoln experts are here. The two principal presenters are James L. Swanson, author of “Manhunt: The 12-Day Chase For Lincoln’s Killer”; and Edward Steers, Jr., author of “Blood On The Moon: The Assassination Of Abraham Lincoln” (the definitive study of the assassination). Other famous historians and writers shown on camera are Harold Holzer, James McPherson, Allen Guelzo, Terry Alford, David Blight, and of course, Doris Kearns Goodwin. The narrator of the program is the wonderful actor Chris Cooper.

The documentary is straight forward: we learn about Booth’s background; the co-conspirators of Booth; the story of how the conspiracy evolved from a kidnapping plot to one of assassination; the hours leading up to the murder; and the hunting and eventual capture and/or killings of the plotters. It’s an absorbing re-telling of a story that probably most Americans know about on a basic level. The re-enactments are kept to a minimum, the cinematography is excellent, and the horror that most Americans felt about Lincoln’s death is conveyed to the modern viewer.

I would like to report that this documentary was perfect, especially since I personally find the assassination to be the most fascinating part of the Lincoln story. Unfortunately, this special is lacking for several reasons.

First, just how many Lincoln experts, writers, and historians does a documentary about the assassination require? By my count, there are about 10 people who are interviewed on camera. Why so many people?

There are factual errors, which surprised me greatly. The Lincolns were accompanied to Ford’s Theater on the night of April 14, 1865 by Major Henry Rathbone and his fiancee, Miss Clara Harris. Inexplicably, Rathbone is called “Corporal” Rathbone in this documentary. With the over-abundance of experts interviewed for this special about the assassination, to have even a fairly minor fact incorrectly stated is inexcusable. If an “amateur historian” such as myself can spot this, surely this high-caliber cast of experts should have. Also, when the narration is describing the immediate aftermath of the shooting, it’s stated that the first doctors on the scene in the presidential box didn’t find a bullet wound at first. Then it’s mentioned that the bullet wound had been found “by the time Lincoln was taken to the Petersen House.” True, but the wound *was* found while Lincoln was still in the box and to imply otherwise is again not accurate.

There were errors of omission which I found to be annoying. The most important fact that no one mentioned in this documentary is that the police guard assigned to Lincoln that night, John F. Parker, abandoned his post for reasons unknown to history. It was mentioned that Booth handed his calling card to Lincoln’s valet, but not a word about the missing policeman. And the amazing thing? Parker was never punished for his dereliction of duty! To learn more about this story of the missing policeman, click here.

The story of Lincoln’s funerals and the funeral train’s journey back to Springfield was barely discussed. Funerals held in Philadelphia and New York City were of course mentioned, but not a single word about his other funerals in Baltimore, Harrisburg (PA), Albany and Buffalo (NY), Cleveland and Columbus (OH), Indianapolis, and Chicago was uttered. It would’ve taken a minute to mention these other cities and the honors they gave to the memory of Lincoln, especially since casual viewers would not probably know about them. This would have gone even further to convey the sense of grief that Americans felt about Lincoln’s tragic death.

I discussed the next point with some of my fellow bloggers, and we all agree: at times it felt to us that we were watching a biography of John Wilkes Booth, rather than a documentary about the assassination. For example, what is important to the story of the assassination about Booth being a great swordsman on stage, or how he had a happy childhood? Does it *really* matter to the story to mention that Booth was “gorgeous”? It’s important to try to understand Booth’s motivation for this heinous act, certainly, but the “fluff” was both unnecessary and distracting.

Finally, the special at the end devolves into “The Hunt For John Wilkes Booth” which I suppose is not surprising considering that James L. Swanson is one of the two major “talking heads” in the documentary. Mr. Swanson’s “Manhunt” is an excellent book in every way and it’s an essential part of anyone’s Lincoln library. However, there is too much detail presented about Booth’s 12 days of hiding out, e.g. his rowing incorrectly across the river, hiding in the pine woods, etc. Once again, are we watching a history of the assassination and its aftermath, or are we watching a biography of John Wilkes Booth?

SUMMARY
While “The Assassination Of Abraham Lincoln” is well-crafted, looks wonderful, and tells a fascinating story ably, I found it to be ultimately disappointing. The errors were surprising. The lack of emphasis on some aspects of the story and the overemphasis on others I found to be annoying. I’ve come to expect better efforts from PBS and American Experience. My rating: