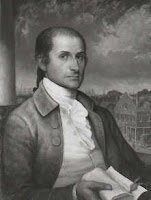 John Jay, the least recognized of the three authors of the Federalist Papers, who was also elected by George Washington as our our Nation’s first Supreme Court Justice, was born on this date, December 12, 1745.

To me this wouldn’t be news if it were not for the coincidence of one of his more famous causes and another significant historical event which shares this same day.
Let’s set the scene with The Federalist Papers.
Written under the pen-name of “Plubius” John Jay is said to have authored 4 of the 85 articles written in support of the ratification of the Constitution approved by the Continental Convention on September 17, 1787. The first of these anonymous articles appeared in the New York Independent Journal on October 27, 1787.

At the time, a federalist was someone who supported “big government”, while an anti-federalist believed the power should remain with the people. John Jay, along with Alexander Hamilton and James Madison were staunch proponents of the new Constitution.
They believed a centralized government was essential to expand the United States both commercially and geographically. Only a strong national government, they argued, could effectively negotiate with foreign countries, ensure free trade between states, and create a stable currency.
Thomas Jefferson, probably the most famous anti-federalist believed that big government would take too much power away from the people, which after all was the true meaning of democracy. It was these beliefs that laid the groundwork for our two party system.
Soon, steps were being taken to make sure that John Jay and Alexander Hamilton would win this battle.
It was December 12, 1787, John Jay’s 42nd birthday when Pennsylvania became the second state to ratify the Constitution, 4 days after Delaware ratified the same document. Happy Birthday John Jay. I’m sure a pint or two was imbibed in celebration of Pennsylvania’s ratification.
On a related note:
Despite both being selected to be in George Washington’s cabinet, Hamilton and Jefferson would have to agree to disagree. Hamilton took the seat of Secretary of the Treasury setting a plan for a capitalist United States based on big government and big business. On the other hand Jefferson was chosen as Secretary of State and asked to deal with foreign powers. His first came during the French Revolution when he and Washington disagreed on how to handle the situation.