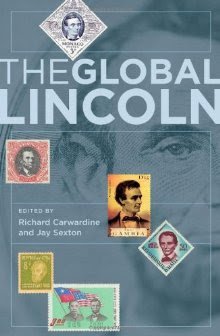 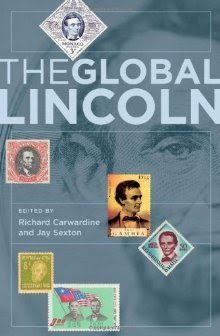 The life and legacy of Abraham Lincoln have been written about in countless thousands of books beginning with the earliest campaign biographies in 1860. His impact on the United States of America was of course significant beginning with his election to the Presidency and continues to be felt today. Republicans and Democrats alike claim his ideals, the current President of The United States considers him a personal hero, and of course historians (professional and amateur both) continue to research and write about him. Many more millions of people are fascinated by this enigmatic leader.

But how did or does Lincoln affect the rest of the world, if at all? Does his story resonate with people in other countries? Do foreign political leaders use his ideals in governing their own nations?

These questions are considered in a newly published book from Oxford University Press. The book “The Global Lincoln” is a collection of essays written by scholars from around the world, including the countries of England, Wales, Spain, India and regions such as Latin America, the Far East, and the American South.

As one of the reviews on the back cover states, “The Global Lincoln is unique.” In my own four decades of reading books about Lincoln, I have never before encountered one which attempts to investigate Lincoln’s enduring legacy (if any) in other parts of the world. Therefore, I was eager to begin reading this book when it arrived from the publisher.

I admit that I have yet to complete my reading of this work. At some points, the book has held my interest, especially in the chapter discussing foreign prints featuring Lincoln. Written by Lincoln scholar Harold Holzer, this essay is well-written in clear language, and reflects his powerful knowledge of the image of Lincoln in prints. Holzer is perhaps the leading Lincoln scholar of our time, and deservedly so.

Other essays, though, are so densely written in a style which academics only use that the author’s point will no doubt be lost on many, if not most, readers. I refer to the opening essay by the two principal editors of the book, Richard Carwardine (President of Corpus Christi College at the University of Oxford, England and Jay Sexton, Lecturer In American History at Oxford). While the essay is informative and serves as a decent introduction to the rest of the book, it is at times so filled with dense information, ideas, and language that it will perhaps fail to entice the average reader into continuing reading.

An example of such writing is the authors’ usage of words such as “dicta,” “lacuna,” and “vacuous” in their introductory essay. Most people probably will not know the definitions of these words (respectively: “statements about political principles”, “a gap”, and “mindless”), therefore missing the point of the essay itself. Ironically, the authors of this essay talk about how Lincoln understood the power of simplicity and accessibility in his words. Lincoln avoided the use of the flowery and rambling language of his day, choosing intead to use more concise language in order to make his own writings more powerful and memorable. It’s a shame that these two brilliant authors of this particular essay ignored Lincoln’s own example.

The rest of the essays are more clearly written, which lend themselves to be of more interest to the average reader. It’s interesting to note that Lincoln had a decent amount of influence in England during his lifetime and during the term of Prime Minister David Lloyd George into the early decades of the 20th Century, but now has waned significantly. Apparently the Welsh strongly identified with Lincoln and his ideals. In India, Gandhi barely mentioned him in his writings and Lincoln has had slight to no impact on the people or politicians there. On the other hand, in Ghana Lincoln’s principles were used by its prime minister during the Cold War between the U.S. and Soviet Union to defend his nation’s strict neutrality.

My feelings about this book are decidedly mixed. For me, it swings between interesting and sleep-inducing. It’s difficult to know what readers the various authors had in mind as they were writing the various essays. My best guess is that they were aiming their efforts at fellow academics, and certainly not ordinary people who want to learn more about Abraham Lincoln and his continuing legacy. To me, that is a shame, because history should be made to come alive for people, not turn them off on the subject even further.

In the final analysis, I must judge this book as only barely recommendable. It will interest only the most serious of Lincoln students and even for them, that interest will be a struggle to maintain.