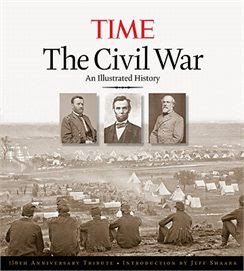 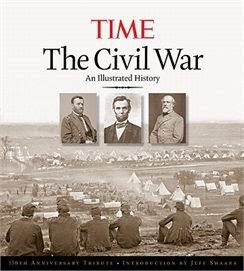 I was contacted earlier this summer by a publicist for Time Home Entertainment, Inc. who asked me if I would care to review their special book issued to commemorate the 150th anniversary of the American Civil War. I agreed to do so, and my thoughts begin below.

The book is titled “The Civil War: An Illustrated History” and has been issued in hardcover with dust jacket for this first release. It contains more than 200 pages complete with text and lavish illustrations featuring rare photographs, including many I’ve never before seen even though I have read countless books about the Civil War and Abraham Lincoln.

All the major battles and other events of the war are covered in the book, including a brief lesson on how divided this nation was in the decades preceding the war itself. There is a fine introduction written by Jeff Shaara, author of “Gods and Generals” and many other Civil War novels.

“The Civil War: An Illustrated History” provides an excellent overview of the war and the writing is quite good. However, it is not meant to be a book which covers the war in depth or great detail, and the advanced Civil War buff might find it repetitive for him or her.

But it succeeds very well as a good basic repository of information, facts, and high level analysis of the Civil War. As I mentioned earlier, I was impressed with the rare photographs included in the book, and for me that is its strongest feature.

Time’s “The Civil War: An Illustrated History” may be found at bookstores everywhere and online from several different sources. Publication price is $29.95, but you will easily be able to find it for less.

Of the many books coming out this year and over the next few years during the Civil War sesquicentennial, this volume stands out as an excellent beginning point for those readers who wish to learn more about the nation’s bloodiest war. Recommended.