Book Review: "Lincoln And His Boys" 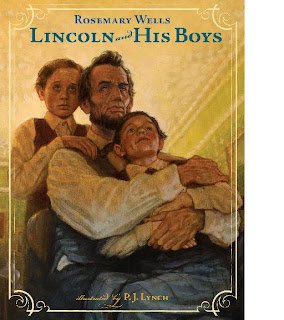 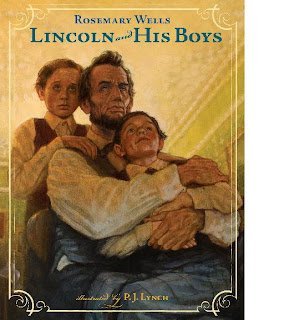 Of the thousands of books written about Abraham Lincoln over the past 150 years, many have been written specifically for children. These books have typically been brief (but complete) biographies or have focused on his presidency or his own childhood. I remember as a young boy being introduced to the world of Lincoln by some of the more famous of these children’s books, such as “Meet Abraham Lincoln” and “Abe Lincoln Gets His Chance.” The one thing common style in these books was that the author is also the narrator.

An upcoming book titled “Lincoln And His Boys” presents a different and perhaps unique approach to telling the Lincoln story. The book, authored by Rosemary Wells, shows Lincoln through his children’s eyes. Targeted for age group 8-12 years, the book’s two “narrators” are Lincoln’s two younger sons, Willie and Thomas (or “Tad” as he was called). Opening with the year 1859, each “son” relates the major events affecting them and their family. Through the eyes of “Willie” and “Tad” the reader gets to experience their father’s preparation for and election to the presidency; the long journey by train from Springfield to Washington; the Civil War; life in the President’s House (as the White House was called in those days); and the emotional walk taken through Richmond, Virginia by Lincoln and Tad after it fell. Along the way, the boys share triumph and tragedy with the reader.

Rosemary Wells brings Lincoln to life. This Lincoln is much more approachable and real, even to the adult reader. He’s not just the crafty politician who becomes president; he’s also a father who worships his children, especially Tad, who in real life was apparently uncontrollable. I found this approach to the Lincoln story refreshing and I suspect it will engage younger readers in a way many other books about Lincoln do not.

It’s obvious that the author spent much time researching the book. Yet the facts never get in the way of the story, an important consideration for a children’s book. Minute details are included such as the name of the hotel where Lincoln and Willie stayed while in Chicago, or the name of the boat which carries Tad and his father to Richmond. Wells was careful to have “Tad” refer to his father as “Papa-day” which is how Lincoln was addressed by Tad, who suffered from a cleft palate. “Papa-day” was Tad’s way of saying “Papa dear”. As the author herself writes, only the dialogue between the characters is fictional.

Emotions come through beautifully in the writing. “Willie” is worried about his mother’s reaction to Lincoln’s decision to run for the presidency. The reader experiences both the excitement and boredom of the long trip to Washington. “Tad” shares his devastation and loneliness he feels when his beloved brother Willie dies. The reader feels the grief his parents feel as well.

The illustrations were done in oils, which adds a measure of warmth to the book. The illustrator, P.J. Lynch, has done a fine job in bringing to life the stories told by the boys. The paintings are of a much higher quality than you’d find in most other children’s books. They convey movement quite well and are beautiful to look at. Some of the illustrations of Lincoln don’t resemble him very accurately, but this is not a major problem.

Finally, the book at only 96 pages is just the right length for the targeted age group. It’s tells the important events in the Lincoln family’s lives, but does not go on so long as to lose the young reader’s interest and attention.

Things Which Made Me Think “Hmmmmm….”

As I was reading the book, a couple of concerns came to mind, one of which I think is fairly major. SPOILER ALERT! Do not read this paragraph and the next one if you don’t wish to know just how the book ends. OK? OK. Don’t say you’ve not been warned. “Lincoln And His Boys” concludes on the evening of April 11, 1865 with Lincoln giving a speech in celebration of the surrender of Lee’s army. “Tad” tells the story to the reader, letting us know that his “Papa-day” asks for the band to play “Dixie” and how Tad is picking up the pages from his father’s speech. “Tad” asks his father if they can go home now, Lincoln smiles, and basically says they can. And that is how the book concludes. It gives the appearance that everyone lived happily ever after, and of course, they did not. Lincoln was shot three nights later and died the morning after that. I’ve gone back and forth in my mind about the ending for a few days now whether or not I think the ending is appropriate. Other children’s books about Lincoln, including ones I read early on, discuss the assassination. It’s a tragic ending to the Lincoln story, but it’s possibly THE event which helped to gain his entry into the pantheon of American history. On the other hand, the evening of celebration in Washington that night just might have been the last happy night of poor Tad’s life. His mother never recovered from losing two sons (Eddie and Willie) and she truly became unhinged after the death of her husband. Tad himself would live only 6 more years, succumbing to tuberculosis at the age of 18. In some respects, I can understand why the horrible endings were left out of the book.

Still, I think some mention of the assassination needs to be made. I would suggest the addition of an epilogue or an afterward in which the final facts are explained at an age-appropriate level. In the epilogue, it could be the author telling the reader about what happened, as opposed to “Tad” talking about it. The important thing to consider is that this book could be the first introduction to Abraham Lincoln and his family for many young readers. These readers need to know the entire story, especially since the rest of the book is so accurate.

(end of spoiler!)
Another thing which struck me, albeit on a less important level, is that Ms. Wells makes no mention of the Lincoln family dog left behind in Springfield. “Fido,” as he was known, was not taken to Washington with the family because he was terrified of loud noises. Lincoln felt that the dog would not survive the journey on the loud train, and the dog was left in the care of another family. However, Fido was a special member of the family and strict instructions were left with his new owners on how to care for him. Even his favorite horsehair sofa was left so Fido could have some measure of comfort. It is known that Tad, especially, begged Lincoln to not leave Fido behind. Sadness is not avoided in the book and it would’ve made the overall story about Lincoln and his boys even more endearing if this episode would’ve been talked about by “Willie” or “Tad.”

Finally, I think a basic “table of facts” should have been included. Kids might like to learn more about Lincoln or his boys and birth dates, birthplaces, important events, and so on would have been very helpful.

“Lincoln And His Boys” is a much-welcomed addition to the world of children’s books written about Mr. Lincoln. Indeed, it has the potential to become a classic read for children who want to learn more about our nation’s 16th president. The unique approach to the story is refreshing, educational, and very entertaining. It helps the reader, no matter his or her age, to see Lincoln as he was, instead of as some long-dead president who is frozen in time. The ending does leave something to be desired, which is a shame considering how delightful and accurate the story telling is. Nonetheless, I will recommend it to anyone of any age who is interested in learning more about Abraham Lincoln.