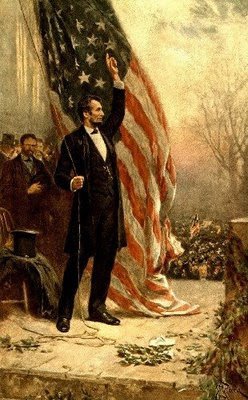 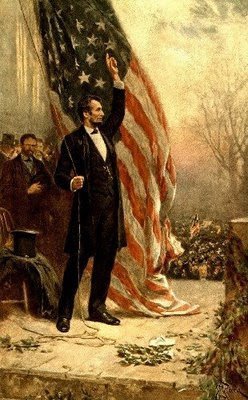 In recent weeks, I’ve been noticing a growing number of “hits” on this blog resulting from searches of “Abraham Lincoln political experience” and searches similar to this. Although I did post an “opinion piece” back in January which very briefly mentioned Lincoln’s political experience, I thought I’d use this post to discuss it in greater detail.
Abraham Lincoln’s political experience began with a loss when he ran for the state legislature of Illinois in 1832. Although he won nearly all of the votes in his own village of New Salem, he lost the overall vote across the district. Later in life, Lincoln loved to point out that it was the only time in his life that he lost an election on a direct vote of the people. He ran again in 1834, was this time the second highest vote getter and obtained a seat in the legislature. He served 4 consecutive terms in the Illinois legislature, eventually rising to become the Whig party leader there. It was in this capacity as a state representative and party leader that Lincoln learned the fundamentals of politics which would later serve him so brilliantly.
Lincoln’s national political experience prior to running for and being elected president was limited to a single term in the U.S. House of Representatives from 1846 to 1848. A lot of searches I’ve been noticing are for “Lincoln U.S. Senate.” No, Mr. Lincoln was a Congressman, not a senator. His single term in the House (as a member of the Whig party) was mostly undistinguished. His one shining moment came in January 1848 when he made a powerful speech in Congress criticizing President James K. Polk for leading the nation into an unnecessary war, that being the Mexican War (which had begun in 1846). He challenged President Polk to provide proof of the need for the war, the amount of money spent on it, and the future plans of the administration once the war was over. He also claimed that the president’s actions were unconstitutional. Unfortunately for Lincoln, his speech was ignored by the administration, unnoticed by the national press, and angered many of his constituents, who ended up questioning his patriotism. The speech was used against him in future years. After having promised to limit his time in Congress to a single term, Lincoln returned to private law practice in Springfield in 1849.
Lincoln continued to be involved in politics although he did not hold any elective office after his Congressional term until he won the presidency in 1860. After the collapse of the Whig Party in the early 1850’s, Lincoln joined the new (at that time) Republican Party and was for a time considered to be a possible vice-presidential candidate in the 1856 election.
It was not until his contest for U.S. Senator in 1858 that Abraham Lincoln truly burst onto the national political stage. The series of debates with his opponent, Stephen Douglas, captured the attention of the nation. At that time, U.S. Senators were chosen by the legislatures of the respective states, and Lincoln eventually lost his bid for the Senate, the more politically experienced Douglas emerging as the winner. But through these brilliant debates, mostly argued over slavery, Lincoln became the towering national figure he was apparently destined to be.
To summarize, Lincoln was a state legislator for 8 years and a U.S. Congressman for 2 years before he was elected president. He didn’t have much experience as an office-holder, but he went on to become the country’s greatest president. Other men (see John Quincy Adams and James Buchanan) had far more experience than he, yet failed miserably in their presidencies. This is why in my opinion, at least, political experience is not a predictor of success or failure of a potential president.
For an outstanding recounting of Lincoln’s early political career in the state legislature of Illinois and his term in Congress, the reader can do no better than David Herbert Donald’s superb biography, “Lincoln.” Doris Kearns Goodwin’s “Team Of Rivals” focuses more on Lincoln’s politics at the national level, but is also quite good. Entire books have been written about the Lincoln-Douglas debates, but the classic reference work is Harold Holzer’s “The Lincoln-Douglas Debates, the First Complete Unexpurgated Text” from 1993.
I hope this brief “lesson” about Mr. Lincoln’s political experience is helpful. Please feel free to comment.