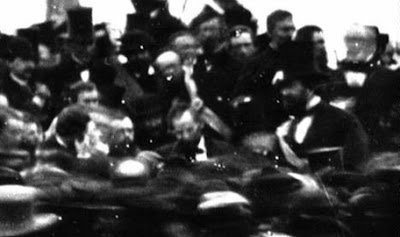 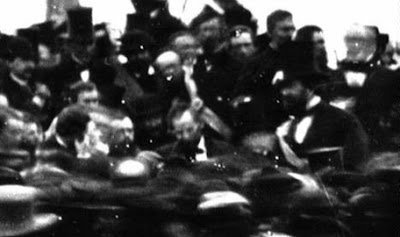 The above image (magnified) is the only undisputed photograph of Abraham Lincoln at Gettysburg, PA on November 19, 1863. Taken either during or just after his delivery of his immortal Gettysburg Address, the photo depicts a hatless Lincoln in the middle of other dignitaries on the speakers’ platform as thousands gathered for the dedication of the National Cemetery that day.

Nearly 6 years ago, I posted this article about a claim which was made by John Richter of Hanover, PA that he had found Lincoln in another photograph taken that day in Gettysburg.  That claim has been the subject of much discussion and even controversy since it was reported in 2007. Even strong magnification of the image could not settle the issue as some (including me) said that the gentleman in that image looked too heavy to be the gaunt Abraham Lincoln.

Now another gentleman has claimed to find “Lincoln” in that photo, but this “Lincoln” is apparently several yards in front of Richter’s gentleman.  This month’s issue of the magazine Smithsonian contains a lengthy article relating the claim of a former Disney animator and current professor Christopher Oakley that he has found “Lincoln” in a different spot in that photo of the crowd. As the claim made by Richter has generated controversy, there are disputes over this latest claim.

Copyright considerations preclude me from publishing the blown up photos from Oakley and the Smithsonian story.  But since the original photograph of the crowd scene is part of the public domain, I include it below. The original article I posted in 2007 and referenced above contains Richter’s “Lincoln.”  The article in Smithsonian contains images of the gentleman Oakley is claiming is “Lincoln.”  I’ll let the reader decide for himself or herself if either of these “Lincolns” is in reality President Lincoln.