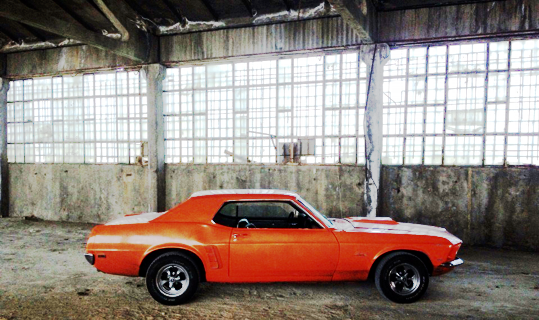 I guess we all have our dreams and each of those dreams has a chance to be fulfilled. Of course, on the way to realization, there comes a moment when the dream transforms into a goal; we get entirely motivated and voilà- here we’ve got the result! Now, you might ask, ‘what’s the point of such a lyrical digression?’ The underlying reason for this is that our today’s hero belongs to those motorists, who have spent years of exertions to achieve his dream. His subject of desire was the first generation Ford Mustang, which was produced by the American company over the period between 1964 and 1973. It was the first mass- and relatively affordable sports car, which revolutionized the US automobile market and became the absolute leader in the category of best selling car throughout the whole period of production. If you are a true mustang admirer, you must be addicted to the first generation model. Over the years, the Mustang has become part of American history, like Coca Cola, the Marlboro Man or ripped Wrangler Jeans. Naturally, this legendary model is admired across all continents of the earth. And lo and behold our hero also got infected with “Mustang Disease”. He dreamt of the great-grandfather of the all American muscle cars since an early childhood! In spite of 10 and a half thousand kilometers that separate Armenia from the US, his dream came true. I won’t go into details about the hardships and miseries in our little country- there came the very day when a dream turned into a goal- the time had come to submit a bid on an internet auction. The necessary lot was in the state of Texas. It was a carefully restored Mustang- hardly anyone could have resisted the temptation of its glittering bright orange. The price was also quite affordable. The deal ended positively and there remained nothing but to wait for the happy moment of meeting the car in Yerevan, which took more than a month. At the beginning of the year 2013, the orange Mustang found its new home. Now a few words about the Mustang: the car was manufactured in 1969. It’s equipped with a straight-six carburetor 4.1 L engine, which produces 157 HP at 4000 rpm. The torque produced by this engine is 240 Nm at 2600 rpm. Transmission: 3-speed automatic. The lucky guy, whose dream came true in front of the all people of Yerevan, intensely exploits his car. The orange Mustang can be seen every day, basically, in the center of Yerevan. It’s impossible to pass by this piece of art indifferently. Perhaps, that’s why the owner gets confused by pulling out scraps of paper with sale proposals and other nonsense under the wiper every day.