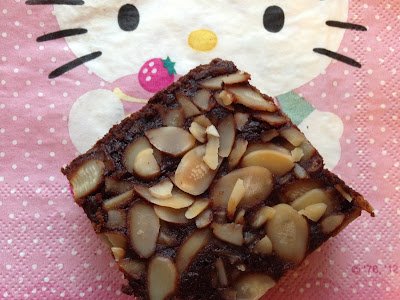 APPLY FOR THIS OPPORTUNITY! Or, know someone who would be a perfect fit? Let them know! Share / Like / Tag a friend in a post or comment! To complete application process efficiently and successfully, you must read the Application Instructions carefully before/during application process.
For these brownies they are definitely both gluten and wheat free, the FODMAP part is on the border – I did check them out with my dietitian as under FODMAP you are allowed 10 almonds – which after working out the total and scaling down is roughly 8-10 almonds per portion, so if you eat two, ahem, then they are taking you over that almond limit! Not that I ate two of course… that would never happen.. though I did have an amusing conversation at work today with a dental health nurse over a particular form she was showing me and after reading through it (as part of the project I am on) I did mutter the words ‘is it bad I had a brownie for breakfast’! Apparently, yes. Oh well…
Baking is a passion of mine – it tends to happen quite organically without much prior planning and I love nothing better than destroying the kitchen and dusting everything with a fine scattering of icing sugar but following FODMAP has definitely tested my repertoire to the max and I’ve explored whole new areas of baking! After initial hit and miss I seem to be getting into a rhythm and these brownies are pretty darn good! The fact that there are just under 4 left out of 9 from the last night is a pretty good sign they are keepers! (though by the time I have now finished writing this up post a blinking windows update grr there are two!) B even gave them a 10 which is a huge improvement on the previous experiments!

These are not fudgey as some brownies but they are soft, light but not too light and chocolatey. I did umm and arr over putting rum in them but I did resist on this occasion. Maybe next time….(though I think am getting a reputation as at a friends annual birthday bbq the other night I was asked if my flapjacks had alcohol in them!!) 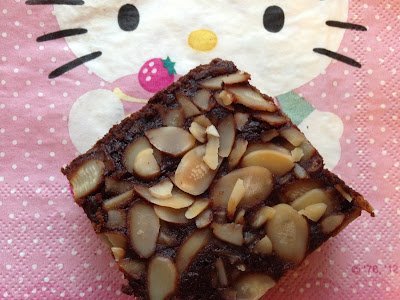 The one main ingredient in making these brownies a little on the squidge side – mashed banana. They need to be very ripe, on the edge of packing their bags and walking out the fruit bowl. You won’t taste the banana but they keep the brownies so moist without lots of butter – I found with earlier gluten free bakes they were a little on the dry side but not with these!
Makes 9 brownies
Ingredients
100g butter
125g light brown muscavado sugar
2 tbsp golden syrup
75g rice flour
25g ground almonds
25g cocoa
1 tsp baking powder
2 small ripe bananas, mashed
2 eggs beaten
50g dark chocolate,chopped
2 tbsp flaked almonds
Preheat oven about 190o (my oven still flexible but basically a medium hot oven)
Line a square tin with baking paper
In a pan melt the butter, sugar and golden syrup until slightly foaming and syrupy, leave to one side
Sift together the rice flour, ground almonds, baking powder and cocoa. Stir in the mashed banana and lightly beat in the eggs.
Use a fork to gently stir through the melted sugary mix until combined. Fold in the chocolate chunks. Pour into the prepared tin, scatter over the flaked almonds and bake for 35-40 minutes or until just cooked through. 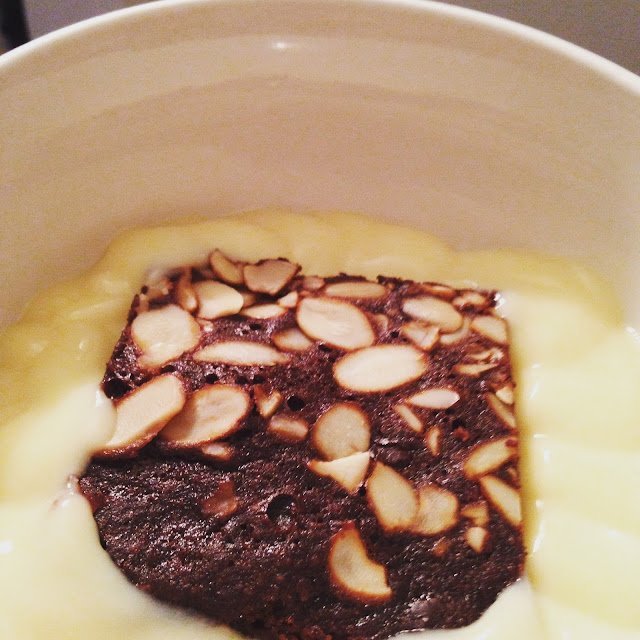