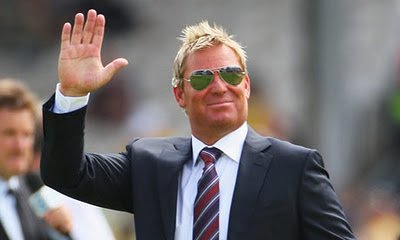 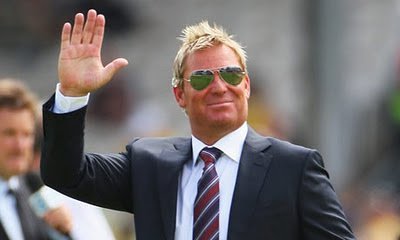 Shane Warne has promised his partner Elizabeth Hurley to give up trying to be a “masterchef” after badly burning his bowling hand in a deep-fat fryer.

The pudgy cricket legend – known for his love of fast food – hurt his hand so badly cooking a pre-training snack in his kitchen there is speculation he may miss the upcoming Cricket Australia’s Big Bash League.

He posted a picture of his precious right hand on Twitter (pic below), showing a number of nasty yellow blisters – the sort of cooking war wound that even the most tiresome, macho, ‘SAS kitchen’ chef would be proud of.

It’s not known how he got the injury, but there were reports he’d burned his hand while deep-frying fish fingers for a heavily-mayonnaised sandwich. Warne – whose life often seems like it’s been scripted by the writers of a cheesy Australian soap opera – twatted: “Not ideal preparation for practice match today – burning the bowling hand. Get better quickly please, any suggestions – HELP.”

Fans flooded him with burn remedies, including lavender, witch hazel, and manuka honey(which I’ve always found works best for burns and cuts, and did wonders to the huge, yellow gobstopper on my thumb when I was thrown a red-hot, metal duck plate.)

Later, Warne, 42, wrote: “Ps no more trying to be a masterchef! Stop and by (sic) a bacon roll on the way to the ground next time – silly Shane!”

He quickly became a figure of fun on Twitter as news of the injury spread. Some speculated he’d been fishing chips out of the fryer before they were ready, some said he might have done it on his hair straighteners or sun bed, and another wag wondered whether he’d actually done it “setting fire to his own farts”.

Still, it could have been a lot worse. Reminds me of the tale a stage chef told me as we were cutting mountains of pistachios in half in the Fat Duck slave compound, sorry prep kitchen.

He said the incident happened when he was working part-time in a burger bar, getting himself through catering college. I doubt whether it was true, but he seemed sincere enough…

“This dude came in for a job,” Eric began. “He was about 17, and had never worked in a kitchen before, and they put him on the fryer. He was wearing this watch – I couldn’t see what it was, but it looked more like one of those expensive German makes or something…

“And I said to him, ‘Buddy, you wanna lose that watch, buddy you DON’T wanna wear that in the kitchen!’ And he says something like, ‘it was given to me by my grandfather’. And then half-way through service, guess what, the watch slips off into the hot fat…and without thinking he puts his arm in to get it out…It was like a reflex man!

“You could see the flesh disappearing on his arm like cooked ham. He said something like ‘hey guys’ and went down like a tonne of fucking mash! Man, that was gruesome! Worst thing I ever saw…”