If They’d Only Used Pomelos At The Fat Duck 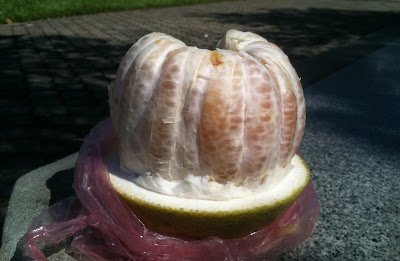 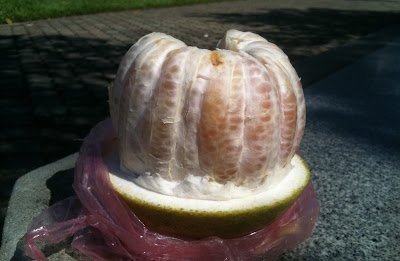 I bought a huge, grapefruit-like fruit the other day that had thick seeds the size of pumpkin seeds, and thick, leathery skin. It was a pomelo – a fruit that tastes slightly less bitter than the smaller, common grapefruit (which is actually a cross between a pomelo and a sweet orange) but gives up its pearls much more easily.

And it made me think of the stage I did at the Fat Duck a few years ago, and all those pointless hours of slavery, prepping endless grapefruit pearls to garnish the salmon poached in liquorice gel dish (pic below). Even the chefs at the Hinds Head, Heston Blumenthal’s pub next door, knew about the grapefruits. The chore summed up the fastidiousness and downright ludicrousness of three-star Michelin cooking. 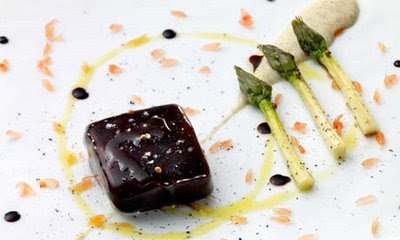 You had to carefully peel each fruit, without bruising or cutting the flesh. Then even more carefully, you’d take the white pithy globe and tease it into segments. Then with a paring knife, you’d pick out any pips and carefully peel away the white, and lay the pink flesh on towelling paper to soak up the juice.

Then the real work began. You picked each segment, flicking off tiny, juice-filled pearls on to another piece of towelling. The work was fiddly in the extreme. Even the slightest pressure would burst them. Once we had covered one piece of towelling with grapefruit pearls, we’d begin on another…

But there was none of that as I sat there on the riverbank in Phnom Penh, easily separating the pomelo into segments, and seeing the pearls fall unbroken into the bag, without the need of towelling to soften their fall. I realised that all that torture could have been saved if they’d only used pomelos instead of pink grapefruits from the Waitrose store up the road in Maidenhead. 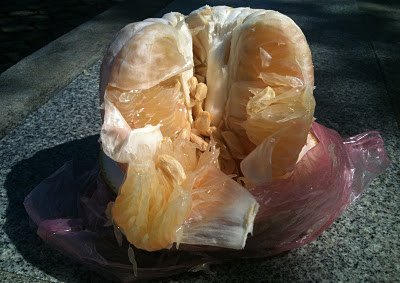 Even with my rusty shovels, the pearls were falling away into such bundles that it would have caused envy in even the most skilled, starry-eyed Fat Duck chef. One cook could have done a whole day’s worth in an hour, saving his colleagues from hours of unspeakable drudgery.

I began to think about why Blumenthal, in his exploratory, pre-Fat Duck days, hadn’t widened his trawl of world foods, rather than spending every holiday in France eating at Michelin-starred restaurants.

But then, maybe he had. Maybe he knew all about the pomelo and had long discounted any possible alchemy that might come from it. We often used to joke during the long hours cutting thousands of pistachio nuts in half, whether the celebrity chef lay in bed at night devising ever more devilish recipes for his slaves to cook.

I was still experimenting with how easily the unbruised pearls fell away from the casing, and hadn’t really eaten any of the pomelo, when a man in a wheelchair, pushed by an older man, approached me for the second time that morning.

I’d given them some money just 20 minutes earlier, but they obviously didn’t recognise me. I mumbled a few words, patting my pocket, and pointing at them, but the man in the wheelchair just pointed at my pomelo and then his mouth. I handed the fruit over, and they smiled, then slowly headed northwards along the river in search of the next barang.

I wandered over to the plush tourist information centre, which had a plaque outside saying the toilet facilities had been donated by someone called Mr Toilet, whose mission in life had been to improve toilet sanitation across the world, starting with Cambodia presumably, which was probably as good a place to start as any. 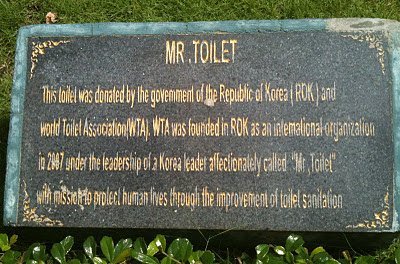 The plush lavatories – donated by the late Mr Toilet’s South Korean-based World Toilet Association – certainly were a shiny affair, looking more like something you’d get in an upmarket casino rather than a tourist office. Not that I’d seen toilets in a tourist office before.

Compared with some of the more basic powder rooms I’d come across on my travels through Cambodia, it was certainly a welcome change. But it did seem an odd choice of mission, making sure visiting South Koreans have decent toilets to perch on, given the widespread, grinding poverty in Cambodia, where many villagers struggle to get by on $2 a day. What did they expect travelling to a third world country?

It seemed as absurd as the noticeboard outside the North Korean embassy, adorned with pictures of their Elvis-loving leader Kim Jong II. In one, he was standing in a factory wearing sunglasses, pointing at an egg with a confused look on his face. The caption underneath said: “The leader Kim Jong II provides on-the-spot guidance at the 927 Chicken Farm.” 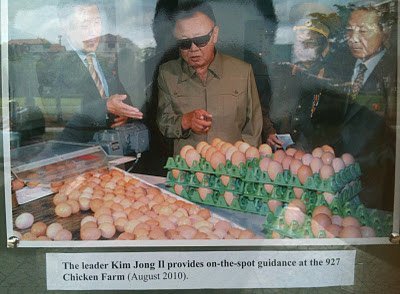 I wandered back north and soon caught up with the man in the wheelchair, who was sitting in the shade eating my pomelo. I smiled at him but he didn’t recognise me. Buddhists were queuing outside a small shrine near the Royal Palace to receive a blessing from a white-clad monk. Three well-heeled pensioners emerged with small cups of sacred water and headed towards a group of women holding cages full of tiny birds.

They said a few words as they sprinkled the birds with water. The birds clearly thought it was raining, and huddled down on their perches. Then the worshippers opened the cages and let them free in batches, saying a prayer to Buddha as they did so. 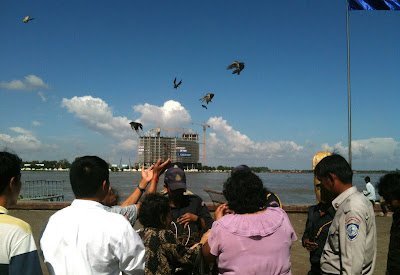 One of the pensioners then stood on the riverside and gazed down into the green water. For a moment I thought he might topple. Overcome with emotion, he said another prayer and wiped his brow with the last of the water. Then they handed bundles of riel to the women holding the empty cages and wandered off with their police escort.

I sat there for a while, as the birds slowly returned to their cages ready for the next customers to release, and thought again about the stagiers locked away day after day in that prep room in Bray.