Being Wined And Steined In Padstow 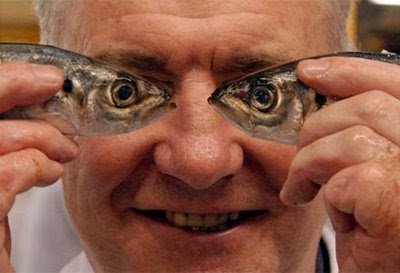 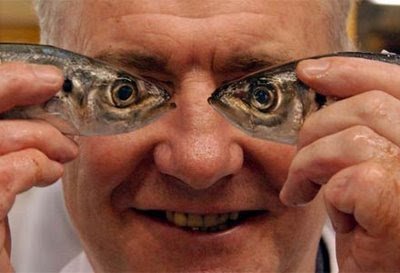 Never look a gift horse in the mouth. Whatever that means. I wouldn’t know how to cook one either. But it’s that birthday time of year again, and with the kids safely in the hands of in-laws, I was whisked away to Cornwall (well, I had to drive five hours before I was told exactly where we were staying.)

I think Lennie may have mentioned Padstein once or twice and has a few tales to tell about a stage in Stein’s Seafood Restaurant kitchen. But this birthday treat meant I had the chance to sample Rick Stein’s kingdom from the other side of the pass.

The expense came courtesy of a now deceased maiden aunt who enjoyed the good things in life and was a regular at Thornbury Castle. A fitting way to spend the money she’d left my wife (my wife thought) and what’s a birthday present if you can’t share it? 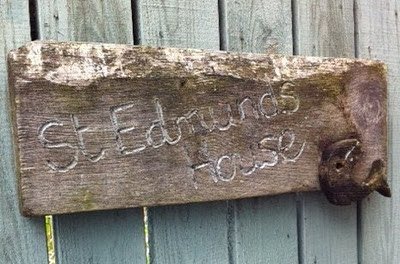 The deal was a three-course meal at St Petroc’s Bistro, breakfast (twice) at the flagship Seafood Restaurant, with a three course meal there in between. Buy your own drinks. Now when something is “all included” or “anything you like” I am suspicious. We looked at the menus – and again – and wondered if it really was anything from the menu.

Could we have a starter and then share the chateaubriand for two at £45? I saw the lunchtime meal deal of three courses for £19, that must be it. “You’re a mini-break booker, sir? This way please wa ha ha haar…”

But no. Just as the Seafood Restaurant does what it says on the tin (33 seafood dishes, only three non-fish options, and only one is a main – it’s fish, ok?) the three course option was anything you like. Kids in a sweet shop. But do you go for the most expensive dish just because you can?

“I’m having steak,” said my wife. “It’s £25.” Apparently you do. I realised it had all been worked out and the restaurant knew what the maximum damage would be, but sometimes you can’t help feeling a little greedy, over extravagant maybe.

A little taster to start – bruschetta of mackerel escabeche. Fresh, lightly pickled fish with crunchy onion and carrot on a piece of fried bread. A taste of fast receding memories of a Cornish summer.

Starters: my good wife had scallops. Chivey topping and on a bed of seaweed (for decoration only, she discovered.) I went for the wood pigeon salad (pic below). The tender pigeon, on watercress, was nicely peppered – which did remind me of Kampot pepper and the fact that Rick Stein has “done” Cambodia on his travels. 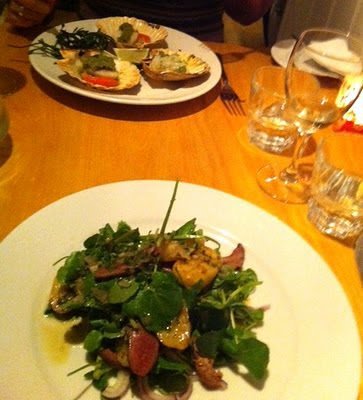 On to the steaks. For a little variety (yes we lean over to taste each other’s food – unless it’s scallops, then I get a sharp fork on the knuckles) my wife had sirloin and I had bavette. I’m not really a steak man. Beef, like chicken, is usually the last option from the meat counter, farm shop or menu, unless you’re talking koo dut (pic below). There are so many more meats, especially wild ones, to choose from. Textures and tastes from venison and boar for example I believe outrank beef. 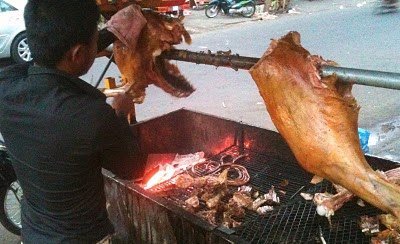 But here was a cut I hadn’t tried, and beef – 28 day dry-aged Aberdeen Angus – was the only meat from the grill. Bavette, the waitress informed me, is “like the skirt you have in stews”. You could only have it medium rare or rare. I like those kinds of instructions on a menu. I admit I was tempted to ask for it well done – just to see what happened. But I behaved.

The bavette bordelaise was served with pommes coq d’or (thin slices of potato cooked in chicken stock with garlic), baby gem lettuce, shallots and a rich, well-seasoned cabernet sauvignon vinegar sauce. The meat wasn’t melt in your mouth tender but was full of flavour, and went down a little better with crispy chips sneaked from my wife’s 14oz sirloin and chive butter dish than the soft pommes.

Desserts. Spanish cheese cake. No contest. There is no base and it is slightly thicker and drier than you might expect, but a great cross somewhere between cake, creaminess and cheese with a baked brown edge of goodness. And that’s before you taste it with the poached pear slices lightly spiced with vanilla. My wife had a sundae – chocolate and vanilla ice-cream with clotted cream that would have seen her well into Tuesday, Wednesday and Thursday if we didn’t have a booking at the Seafood Restaurant… 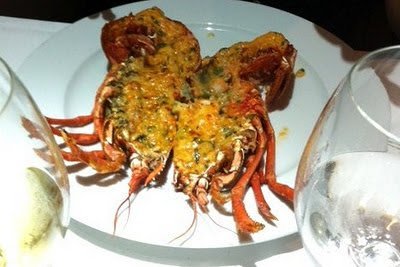 We’d done the turf, now the surf was up. On a Monday as well. Sorry Anthony Bourdain. There is almost too much to choose from on the menu. Still three courses to choose, but what to go for? Something expensive, unusual, familiar?

Dover sole, sea bass, fish pie, monkfish vindaloo, crab, the list went on. Bouillabaisse, turbot, brill, fish and chips…or duck. My wife did break from tradition and forgo the scallops, and had crab with Russian salad followed by a rich lobster thermidor (pic above). I just fancied lobster, straight up, no fuss. So steamed lobster it was for me (pic below). “Small or medium lobster sir?” Let me think for a second, yes definitely medium please. 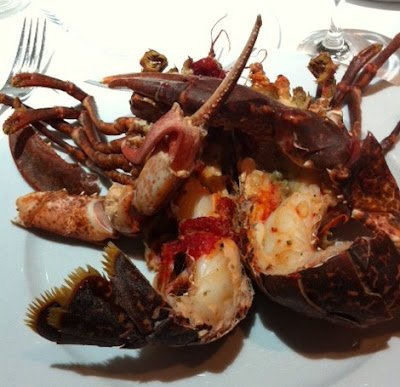 For my starter, I was tempted by the fruits de mer – razor clams, oyster, crab, lobster – a little rock pool on ice. In fact I was tempted by a lot. But oysters are my favourite. So are spicy sausages. And here they were in the same dish.

A bite of creamy fresh oyster, a chunk of sausage – a bit of chilli but not too much paprika – and a slurp of cold white wine. It was a beautiful starter. The lobster was as simple as you can get but what could be better? Steamed, rich meat from the body, lighter, sweet meat from the claws and flecks of red roe. It came with mayonnaise, which I prefer a bit lemonier and left most of it, but the lobster was enough on its own.

For the desserts, the filling lobster certainly ruled out cheeses. But before I had got to the bottom of the list, my wife suggested: “Why don’t you have the tarte, then I can have the crème brûlée?” Too stuffed to argue, I had the drum roll pear tarte tatin with scrumpy ice cream. Gooey, syrupy…and my turn to wrap knuckles. The crème brûlée was delicious, apparently. I can only confirm the pistachio biscotti was good.

The restaurant was fairly busy for a Monday. It’s a large room with a massive bar whacked in the middle covered in bathroomy tiles – maybe a job lot left over from all the Stein luxury accommodation dotted around town? I thought I’d overdone the pre-meal drinks as the ceiling above the bar seemed to glow neon pink, then green. But no, it was intentional apparently, if a little odd.

Mind you, we were sitting below a painting of a pig in a nurse’s outfit. Looking around the room, it was like some mad curator had thrown up a gallery’s leftovers. A huge painting that seemed to show the inside of an Arabian tent with tagines and cushions had a copy of Rick Stein’s Mediterranean Escapes peeping out. Another subtle reminder, in case you needed one, of whose gaff it is.

The waiting staff were all friendly and not too overbearing. They must get sick of the “where’s Rick?” question, but I’m sure I heard it asked twice. So two nights and four meals later, we had been truly wined and Steined. I don’t think our steak and lobster choices would have hit the profits too hard, and I think Aunt Grace would have approved.

:: Dom Bailey is a writer and singer-songwriter. His songs are here at