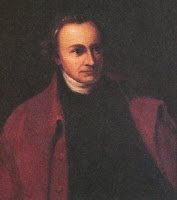 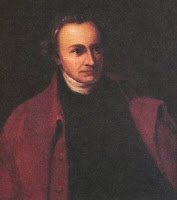 “Is life so dear, or peace so sweet, as to be purchased at the price of chains and slavery?…I know not what course others may take, but as for me, give me liberty or give me death!”
Those famous words were spoken in March, 1775, by Patrick Henry, the great orator of the Revolution. Relations between England and the colonies were at the breaking point, but some members of the Virginia legislature were reluctant to take up arms. Urging action, Henry spoke the words that became a rallying cry for patriots throughout the colonies.

This was not the first time that a speech by Henry had stirred up his countrymen. In 1774, at the First Continental Congress, the lawyer from Virginia spoke these words to inspire the delegates to work together: “The distinctions between Virginians, Pennsylvanians, New Yorkers, New Englanders, are no more…I am not a Virginian, but an American.”
Henry was elected governor of Virginia in 1776 and served for five terms. After indepdence, he worried that a strong federal government would limit the rights of the people and the states. His opposition to ratification of the Constitution in 1788 helped bring about the swift passage of the Bill of Rights, guaranteeing Americans’ basic freedoms.

Patrick Henry was brilliant, but he was not well educated. Thomas Jefferson said he was the “laziest man in reading I ever knew.”